Scan for ssh running on network and get the ip addresses.

put into a file.
Now we have our list of targets. Lets use Hydra to brute force ssh credentials.
Im going to use a shortened wordlist but feel free to use lists from SecLists or other sources.

A keen eye might note the current working directory of the above screenshot. I wrote a wrapper script to brute force ssh and format it in such a way that we can use later on. 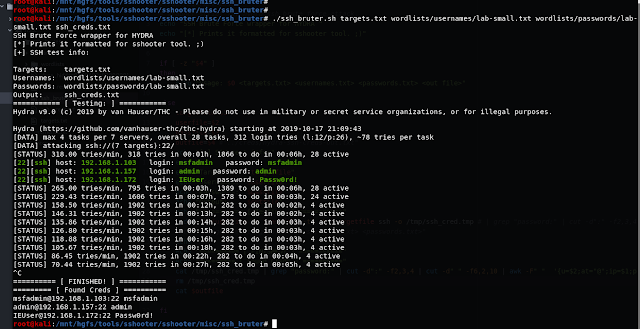 So thats how the ssh_bruter.sh script works.

So why the formatted output? Im glad you asked.


Let me introduce you to another little tool I wrote I like to call SSHOOTER.

Its kind of a SSH administration tool. I plan on adding more features in the future but it helps with some simple tasks for now. It takes a creds.txt file with the formatted output from the ssh_bruter.sh script.

I wanted a centralized way to manage multiple systems that were running ssh in a somewhat easy way.  Got tired of having multiple terminals sshd into a remote box and trying to execute a simple task on them all and get the output.  You know when youre in your pentest lab and need to check the ip on a few systems or restart a service.


So what can we do with SSHOOTER?

As we can see the creds logged in and we have gotten the hosts runtimes. :)

Lets open a shell on host 0. Its a metasploitable 2 vm FYI.

Enter the host we want to open the shell on.

type exit to exit the shell.

enter 4 in the main menu
When prompted enter the file to download from host
then the destination
and the host to execute on. 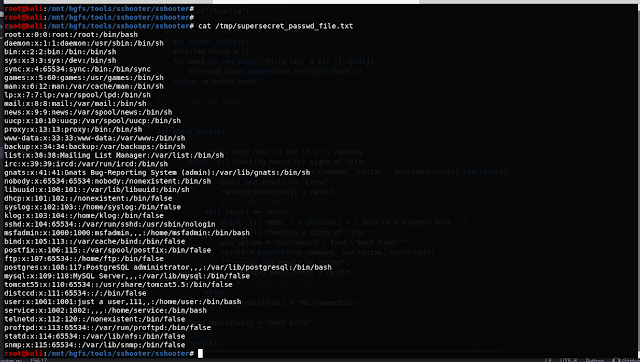 That's it for now.
Hope you enjoyed the blog post.


Feel free to play around with the scripts and see if they help you.  I've noticed hydra is pretty unstable sometimes and just hangs.